TufStuff, Inc., sells a wide range of drums, bins, boxes, and other containers that are used in the chemical industry. One of the company’s products is a heavy-duty corrosion-resistant metal drum, called the WVD drum, used to store toxic wastes. Production is constrained by the capacity of an automated welding machine that is used to make precision welds. A total of 2,000 hours of welding time is available annually on the machine. Because each drum requires 0.4 hours of welding time, annual production is limited to 5,000 drums. At present, the welding machine is used exclusively to make the WVD drums. The accounting department has provided the following financial data concerning the WVD drums: 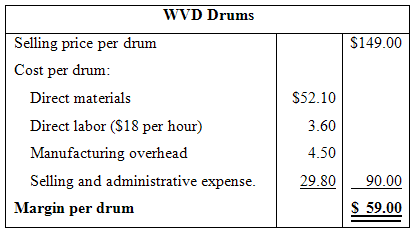 Management believes 6,000 WVD drums could be sold each year if the company had sufficient manufacturing capacity. As an alternative to adding another welding machine, management has considered buying additional drums from an outside supplier Harcor Industries, Inc., a supplier of quality products, would be able to provide up to 4,000 WVD-type drums per year at a price of $138 per drum, which TufStuff would resell to its customers at its normal selling price after appropriate relabeling. Megan Flores, TufStuff’s production manager, has suggested that the company could make better use of the welding machine by manufacturing bike frames, which would require only 0.5 hours of welding time per frame and yet sell for far more than the drums. Megan believes that TufStuff could sell up to 1,600 bike frames per year to bike manufacturers at a price of $239 each. The accounting department has provided the following data concerning the proposed new product: 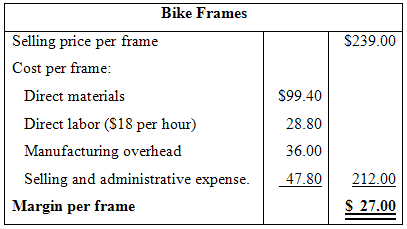 All of the company’s employees—direct and indirect—are paid for full 40-hour workweeks and the company has a policy of laying off workers only in major recessions.

1.         Given the margins of the two products as indicated in the reports submitted by the accounting department, does it make sense to consider producing the bike frames? Explain.

As soon as your analysis was shown to the top management team at TufStuff, several managers got into an argument concerning how direct labor costs should be treated when making this decision. One manager argued that direct labor is always treated as a variable cost in textbooks and in practice and has always been considered a variable cost at TufStuff. After all, “direct” means you can directly trace the cost to products. “If direct labor is not a variable cost, what is?” Another manager argued just as strenuously that direct labor should be considered a fixed cost at TufStuff. No one had been laid off in over a decade, and for all practical purposes, everyone at the plant is on a monthly salary. Everyone classified as direct labor works a regular 40-hour workweek and overtime has not been necessary since the company adopted Lean Production techniques. Whether the welding machine is used to make drums or frames, the total payroll would be exactly the same. There is enough slack, in the form of idle time, to accommodate any increase in total direct labor time that the bike frames would require.

5.         What do you think is the correct way to treat direct labor cost in this situation—as variable or as fixed? Explain.